What an intense year it was January! Quite honestly, I’m used to intense lessons. I know pretty well now that we just have to accept the lesson and flow, we can’t fuel it with fear or anger. Which brings me back to the anger topic I had promised to tackle. In truth it’s all about pausing, shifting, feeling and letting go. Easier said than done, but I got you.

More than a decade ago I was there, volatile and unable to manage my emotions. I wasn’t even self-aware enough to realize how I was hurting others, but the universe was not about to let me get away with that. I began to realize how we truly co-create the world with each action we take. I understood that everything had meaning, a reason for being; Slowly leading us to where we need to be.

I used art as a means of self-discovery which brought tons of self-awareness. My thinking became less self-absorbed and more concerned about the secrets of the universe… But before I could get there, I had to start making changes. It started as observations, that led me to have acceptance and more patience- ultimately leading to more love. For example, when I drove and would get cut-off, I no longer became angered. I started thinking well, I’ve done that too at some point in time etc. That same thinking let me to understand that every trigger or annoyance was something that I had already done or could do if I wasn’t self-aware. It became easy to forgive because surely, I would forgive myself. However, there are lines I couldn’t cross. My compassion has an end, in my case I can’t forgive perpetrators of child trafficking/abuse. I better not get started on that because it irritates me… take today, as I write millions are watching the Superbowl and even more committing crimes against those that are being trafficked.

Want to know what I did to be able to shift from that which angers me? I had to stop, breathe, stretch and then breathe again. I then briefly acknowledged the anger and released it.  Like Ganesh says, new beginnings start with every breath. We will be angered, but we have to pause to recognize it, breathe to begin anew and shift our perspective. Our hearts may still feel heavy, for there is no immediate solution and there’s no easing the pain, but it’s no longer a blinding madness. Sit with the emotion, let yourself feel it, let it talk to you. Don’t allow the voice to diminish you, is not your fault, but from now on you can bring forth change, positive change.

I love you guys a bunch, may truth speak to your hearts in February! 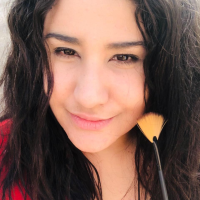 Tamara Liz Rivera Hyde, LMHC is a mental health counselor, art therapist and spiritual guide. She loves to inspire people to tap into their innate creative abilities to self-express and self-actualize.